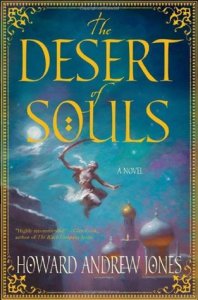 Told in first-person perspective through the eyes of Asim, the Captain of the Guard for Jaffar, son of the vizier, The Desert of Souls is a sword-and-sorcery adventure set in 8th century Baghdad.

Here are some other reviews for The Desert of Souls:

King of the Nerds

It was Robert Thompson’s Review at Fantasy Book Critic that intrigued me and led me to purchase this book, and I’m glad I did. The Desert of Souls is an engaging, enjoyable read that made me regret putting the book down whenever I had to stop and attend to other things. Robert refers to suggestions that the story is a cross between 1001 Nights and Sherlock Holmes; references are also made to Robert E. Howard, Sinbad, Indiana Jones…I don’t agree with all of these comparisons, but I would throw in Michael Moorcock’s Elric books. This felt very much to me like Elric meets Arabian Nights; not so much the Elric character, but rather Moorcock’s style and descriptions, albeit with a first-person narrative.

What I liked most about the book is the prose of Jones. Smooth and effortless, with a definite middle-eastern flair, I fell in love with Jones’s style and his skill at weaving adventure, action, wit, religion, and realism into a cohesive story. It also doesn’t hurt that a good first-person narrative is my favorite kind of story.

As I finished the book, I was struck by the changes that Asim goes through, some obvious and some more subtle (I’ll try to keep spoilers to a minimum here). Asim begins the story with an almost blind devotion to his master Jaffar and also to God. He has few friends, disdains and feuds with the house poet, and is concerned with etiquette and protocol. He sees few problems that can’t be solved by either his sword or God’s will. By the end of the story, Asim experiences true friendship, sacrifice, bravery, and trust in others; he violates protocols at the risk of his own life; and he even questions his own misconceptions and shortcomings. He is transformed by his adventure, and is an easy hero to root for.

His friend Dabir does not achieve the same amount of transformation, though he does go through some changes. Dabir is a scholar who does a lot of the thinking and planning. Other characters act realistically but perhaps aren’t fleshed out as much as they could be. Firouz and Diomedes are good villains; Firouz is well-done, with an initial magnanimity towards the heroes, that eventually gives way to annoyance and then hatred as Asim and Dabir attempt to thwart his plans. The most annoying character is probably Sabirah, Dabir’s student and Jaffar’s niece. Her actions, while they drive tension in the story, feel superfluous and unnecessary; the story could have been written without her and the reader wouldn’t be missing much. I know that her actions are a reflection on her society’s restrictive attitudes towards women. It is also true that she’s the only female in the story with more than a bit part.

The settings are believable and have just enough detail to keep the story moving without bogging it down. I really came away with the impression that Jones has brilliantly captured 8th century Baghdad and that he is well-studied and knows his subject matter, whether it be the history of a city or the nuances of Islamic customs. One of the most fantastic scenes in the book occurs in the desert, with a trip to an alternate world. Here is where the book derives its title…The Desert of Souls refers to an area in this other world where souls are trapped by a powerful entity. I found that this alternate world was one of the better parts of the story.

Wit is abundant throughout the book, sometimes used to impart information or drive home a subtle barb, other times to provide humor. Speaking of humor, I did laugh out loud when Hamil the poet is launched over the head of a camel while trying to ride it.

Jones often takes the time to explain the actions or thinking of his characters, making sure to plug holes where there are questions. Unfortunately, this is less prevalent towards the end of the book, when some of Dabir’s actions and knowledge are questionable and not explained. This, however is a minor quibble and the story doesn’t suffer for it. The other minor quibble I had was with chapter length. Sometimes it’s hard to find a place to stop – not that I wanted to (life has a nasty habit of getting in the way). For instance, chapter 4 is only 11 pages, but chapter 5 is 36 pages. But again, this is a minor issue.

Howard Andrew Jones has hooked me with a terrific story of middle-eastern adventure, rife with magic, swordplay, and great prose. I hope he decides to write another installment in the same setting with some of the same characters…I for one would look forward to such a tale, and I’m happy to have added The Desert of Souls to my library.

3 thoughts on “Book Review: The Desert of Souls by Howard Andrew Jones”