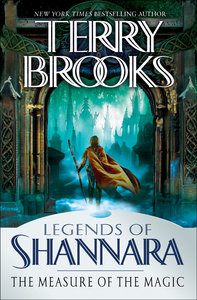 The Measure of the Magic is the sequel to Bearers of the Black Staff. You can find my review of that book here:

I had a lot of problems with Bearers of the Black Staff, and those issues still persist in The Measure of the Magic. Let’s take a look at them one by one…

Interest Level: This did not improve for me. If anything, it worsened with the deaths of characters in the previous book that I was interested in. I must say I’m growing weary of Mr. Brooks focusing on young teenagers as his main protagonists. Older characters seem to exist only as villains or mentors.

Villains: My complaint about uninspired villains remains. The focus of this book shifts from scheming humans to – a demon. Demons have been used extensively by Brooks in many of his stories, and have become a bit repetitive. This one somehow survives Armageddon, and although he pursues the bearer of the black staff, he never appears in the previous series where there were more staffs being used, and used far more frequently. At one point of the story this demon shoots green flame from his fingertips in a scene that is reminiscent of Palpatine’s attack on Mace Windu and Yoda in Star Wars: Revenge of the Sith.

Plot: again, we’ve made no progress here. ***SPOILER ALERT*** I’m supposed to care about the people of the valley, but they remain nameless and faceless. Even worse, an entire village follows the demon blindly despite witnessing his blatant murder of a respected town elder, then they are marched out of the valley and slaughtered by Trolls. The King of the Silver River makes an appearance, and it is implied that he has some knowledge of the future, because he says that Pan must confront the demon. Yet the King of the Silver River is only interested in protecting Pan; the previous bearer of the staff, the villagers who are slaughtered, and another main character that dies are of no significance. So in essence, the actions of Hawk in The Gypsy Morph, in which he saves people from Armageddon, changes nothing, as the descendants of those saved are wiped out anyway. Now I realize that the valley is populated by more people than the village of Glensk Wood; however, none of those other people lift a finger to help defend against the invading trolls. This paints those other people as self-serving and naive, so I ask again: why should I care what happens to these people?

Continuity: I expressed some misgivings about plot points and characters missing that tie into the previous books. This has changed a little bit with the return of The King of the Silver River. Are the Word and the Void no longer “entities”? Why? I had wondered about the Ellcrys, but I believe it is holding back demons from the time of Fairie; demons walking the earth in this series and the last were created by the Void, from men who chose to become evil. I’m still curious to see how Brooks gets from here to the events in First King of Shannara.

The book isn’t awful, but it’s far from the best Brooks has to offer. Hopefully he turns that around in a forthcoming series, and for now I’ll give him the opportunity. Another book like these last two, however, and I’ll have to find other alternatives.