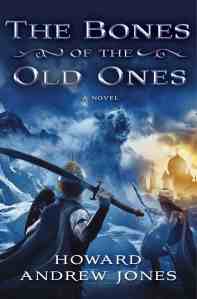 This has been an excellent holiday season – I don’t normally get much time to read, but I’ve managed to polish off The Bones of the Old Ones. I was so impressed by Jones’s The Desert of Souls (of which you can find a review here), that I had been hoping for a sequel, and was disappointed to discover that the collection of Asim and Dabir stories titled The Waters of Eternity was only available on Kindle. At last, The Bones of the Old Ones has been released, and I immediately acquired it. My review follows, with minor spoilers ahead…

Asim the warrior and Dabir the scholar are enjoying the comforts earned from their previous services to the son of the vizier, Jaffar. Told once again in first person, not through the eyes of Asim as it happens, but rather as a story being written some years later, the adventure begins immediately. Asim and Dabir are no longer members of Jafar’s household; they now have their own house in the city of Mosul. When a beautiful woman escapes her kidnappers and is found by one of Asim’s servants, Asim and Dabir pledge their assistance to help her return home. However, matters get complicated when the kidnappers try to take her back by force. It seems that the kidnappers are ancient and powerful wizards called Sebitti, and their arrival sets off a series of confrontations that reveal the kidnapped woman, Najya, is cursed. To break the curse, Asim, Dabir, and Najya must venture out to find the bones of the old ones, ancient weapons that are thought to be able to break the curse. Things, however, are not always as they seem, and as the curse gets stronger, the entire world is threatened. It is up to Asim and Dabir to join forces with one of their old enemies and try to keep the world from falling to an an ancient, alien evil.

In my review of the first book, I was impressed by the way Jones grew Asim’s character. That growth continues here, with Asim’s heart, courage, and determination becoming more defined as his most prominent characteristics, but he is also supported by his wits and wisdom. Like Hamil the poet in The Desert of Souls, who won over Asim’s dislike and mistrust, Asim is able to win over an old enemy, who comes to realize that Asim is not just a thug with a sword, but is much more than he first seems. Dabir again does not seem to change much – he seems like a tragic character – however, he possesses traits similar to Asim’s, and seems to show a resilience in the face of tragedy. Other supporting characters are well done, with the Sebitti portrayed not as simply good or evil; rather, they have their own specific motivations that are self-serving, although at times their shifting motives are hard to comprehend. The female characters are more fleshed out and show more depth than the first book; Najya is integral to the plot and is a strong character, but I would argue that the Greek necromancer Lydia is one of the best characters in the story – she also is transformed by events, and has more depth than first appearances suggest. She is a very strong character, and the tension and presence she brings is a welcome addition to the tale.

The plot moves along at a brisk pace. There are copious amounts of action and no pages are wasted filler, as the plot advances rapidly and more mysteries unfold as the story moves to its conclusion. It also helps that Jones doesn’t have to spend time on introducing us to Asim and Dabir, since that’s already been done in The Desert of Souls. The scope of the plot is far more epic than the first book, with the fate of the world at stake. There were some twists and turns that I didn’t see coming, with lots of shifting allegiances, and Jones does a good job of veiling who lives and who dies until they meet their ends. I can say that the ending was not surprising, given the fact that it could of gone one of two ways – happy or tragic – but it’s the tension of not knowing which of the two ways the story will go that keeps it compelling, as either ending would be fitting. Fantastical elements abound, from magic weapons and spells to flying carpets, rocs, and ghostly ice spirits. Humor is much the same as it is in the first book, delivered as witty barbs.

Like The Desert of Souls, The Bones of the Old Ones is an easy, enjoyable read thanks to the smooth, flowing prose of Jones. Although 8th century Arabia is still the setting, the culture is not quite as prominent as the previous story, due to the fact that much of the action takes place in barren countrysides and ruins. Jones has still done his homework, however, tying his story to some ancient legends and touching on the conflicts between Arabs, Greeks, and Khazars. Some of these thoughts can be found in the afterword, which provides a bit of insight into Jones’s thought process and his recommended references, and where Jones also reveals Howard Lamb and Fritz Leiber to be inspirations. According to Jones, however, it is Zelazny’s Amber series that he perhaps admires most, and maybe that is why I’m so drawn to Jones’s work, because that is the series that I admire most as well, as I mentioned in my classic review of Nine Princes in Amber earlier this year (I also purchased The Road to Amber a few months ago just to read the Amber-related short stories).

In conclusion, the sequel is everything I hoped it would be: more epic in scope, with a great deal of  action and adventure, while at the same time improving the depth of supporting characters, all wrapped in the guise of a mystery…swords and sorcery doesn’t get any better than this. Jones is rapidly becoming one of my favorite authors, and I for one hope he continues to find success and gives us more stories in this setting. Highly recommended to all – I believe there’s something here for everyone.