In my post about things I collect, I mentioned that one of my interests was beer tap handles. A little over a year ago I was able to obtain the #1 tap on my wishlist, a steampunk tap from a brewery called Dogfish Head out of Milton, Delaware. Dogfish Head was already on my radar for their “Ancient Ales”…re-creations of ancient recipes found from various archaeological sites around the world. These amazing brews include Midas Touch Golden Elixir, a strong ale based on residue found on drinking vessels from the tomb of King Midas, dating back to the 8th century BC and containing ingredients including Muscat grapes, honey, and saffron. There’s also Chateau Jiahu, a spiced strong ale based on residue from pottery found in the Neolithic village of Jiahu (in central China), dating to the 7th millennium BC, with ingredients such as rice flakes, wildflower honey, hawthorn fruit, and Chrysanthemum flowers (this is the oldest known beer recipe to be brewed in the modern age).

Certain Dogfish Head tap handles are some of the most expensive and sought-after, with the steampunk tap (pictured left) routinely going for over $400 on eBay. I came across another rare Dogfish Head item on eBay that I just had to have. Ladies and Gentlemen, I present to you: 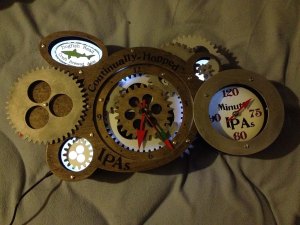 This rare beauty (there are fewer of these than the tap handles) was picked up for quite a deal, considering they were $300 + shipping when they were originally available from the Dogish Head store; they sold out fairly quickly. The last one on eBay (before mine) sold for $408, and there’s one currently listed for $935! It does need a little work – the left gear is supposed to turn and the right needle is supposed to spin, but neither of them do. There’s also a section of LEDs not functioning on the right side. But these are all minor issues that I believe I can repair/replace without too much expense. The bottom line is that I now have a clock to match my tap!