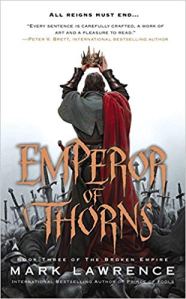 One Sentence Synopsis: Jorg journeys with his family to Congression, battling the minions of the Dead King along the way, in order to restore the Broken Empire under one ruler – and Jorg intends to be that ruler.

I have finally completed the journey that many others finished long ago: I have come to the end of the Broken Empire trilogy. After being intrigued by Prince of Thorns and experiencing mixed feelings regarding King of Thorns, did this final installment swing me one way or the other? Read on to find out, but as always, beware of spoilers. First, however, let’s have a look at the guest reviews from around the Web…

Jared at Pornokitsch has one of the most incredible, thoughtful reviews I have ever seen in a fantasy book review. In it, he says: “I’m repeating myself, but I’m doing so on an annual basis, so forgive me: there’s so much right about this book. For one, the split narrative is a lovely piece of literary trickery. In previous books, most notably King, ‘past-Jorg’ was running about gathering power-ups for present-Jorg’s use in the book’s boss fight. Emperor is a bit more subtle about it: Jorg is still arming himself, but he’s doing so, if you’ll excuse the wank-word, philosophically…The result is that Jorg is enlightened with the Big Picture of what’s at stake: possibly the universe, probably the world, definitely humanity. And here we have the critical path of Jorgism: does he sit back and let the real chosen one handle it (the Prince of Arrow) or does he take care of it himself? In effect, we’re led to believe – as Jorg often recites – sometimes you need a bad person to do the right thing. Jorg is motivated (ostensibly) with the believe that he’s the right wrong person to save the world…The balance of big picture, little picture and the active subversion of the epic fantasy ‘destiny’ trope is incredibly compelling. The elements are woven together so that Jorg has both free will and predestination, he himself is not chosen. Instead, the universe requires a very specific person for a very specific task, and Jorg is determined to claim that role for himself. He is molding himself into a Platonic form. Does it make him a hero (he’s keen to save the universe, right?), a monster (he embraces the ruthless things it will require of him) or merely a flawed and selfish human (Jorg doesn’t care about the universe or the ruthlessness, he’s just determined that the bigger ‘story’ be all about him). That’s the big good of Emperor of Thorns, and it is both very big and extremely good…Emperor also left me with the sinking suspicion that, as far as the text is positioned, Jorg was forgiven. Redeemed, even.”

Phil at A Fantasy Reader states: “At first, I thought that the flashbacks would have a lesser impact on the present story but I was happily deceived. The whole plot doesn’t revolve around a mystery as intriguing as the memory box in King of Thorns but the experiences and discoveries of Jorg are paramount to some events from King of Thorns and to several circumstances influencing what’s happening toward the end of the book…He’s not mighty in term of military power, but an incarnation of dedication directed toward a goal can be devastating and he’s ready to do everything that needs to be done in this unforgiving world (I wish you could read about more of what’s outside the Broken Empire)…It’s the last book in the series and I thought that Lawrence wouldn’t leave much in term of unresolved business. He doesn’t but for some threads, the explanation behind the denouement isn’t shown directly from Jorg’s perspective. He sees the impacts more than the course of it. In retrospect, I think that it was essentially a wise decision by the author and it probably kept the narrative tighter (certainly to the disappointment of some readers)…There was also a flashback where I felt that Mark was trying to add another layer to the reasons behind the portrait of terrible doom that is Jorg and I think it was not necessary (the scene at the Monastery)…I’m still not sure about my feelings for the conclusion of Jorg’s trilogy. It was such a ride, I mean, with such a powerful character, expectations flew in every directions. And that’s probably the problem for me. These expectations lead me nowhere since I didn’t see it coming. Not that it’s the revelation or shock of the century but with a touch of weirdness involved, I had not expected something like this, which is a good thing.”

Finally, Redhead at The Little Red Reviewer surmises: “Jorg’s future lies at Congression, but every person he’s killed along the way becomes another corpse for the Dead King’s necromancers to raise up…Pacing, again, was an issue for me. This is more of an introspective book, so there was far less action, and far less character interaction and banter. As in King of Thorns, much of the narrative was Jorg’s questioning his own actions. Did he do the right thing, should he have done this other thing, or listened to this other advisor, or spent more time on whatever, and it got repetitive. I did appreciate the handful of chapters from Chella the necromancer, and it was interesting to see her point of view, as she’s the only person who has had interaction with both Jorg and the Dead King. As the end of the book got closer, and some hints were dropped as to the identity of the Dead King, I began to get very worried. We do learn the identity of the Dead King, and while the timing made sense, I simply could not for one second buy into the Dead King’s identity. I could accept the timing, but from what I knew about this character, their transformation into the Dead King made no sense to me. Unless of course, the only reason for that person to have become the Dead King was so that the very last scene could occur. Was the Dead King then, nothing more than another clunky plot device? Suffice to say, I was incredibly disappointed with the conclusion of this series. Mark Lawrence is ever the risk taker, it’s earned him well deserved applause and attention. The risks he took with this entire series worked for a lot of people, as can be seen from the many glowing reviews. But when it came down to it, the further down the road I went towards the conclusion, the less satisfied I was with the journey.”

There are plenty of other reviews that talk about plot, pace, characters, dialog, etc. Many of these other reviews are spot on in terms of analysis, and I don’t think I have anything new to add. In fact, all that I can really add are my feelings about this book, its place in the series, and the complete series as a whole.

The book itself is a bit plodding, and I initially found the flashbacks annoying. But a funny thing happened on the way to Congression…I began to enjoy the story any time the Dead King or Chella were in play. There is particular scene where Jorg is stomping around in a bog, half-delusional and with enemies closing in. I though that this scene was one of the finer moments of the whole series. Unfortunately, the sex scene in the coach with Chella is one of the worst moments in the entire series, as I find the reasons behind it utterly implausible.

SPOILER! As all the pieces fall into place to get Jorg where he needs to be, with the allies and votes he has to have, it almost feels a little too scripted to have everything come together in his favor. If it wasn’t for Fexler, the pre-apocalypse AI that is responsible for manipulating events from afar, it would be damn near impossible.

The most difficult part of the series was always going to be the ending. Did Jorg earn redemption? Did he deserve it? Was he capable of humility? Or was he going to be a jerk to the end? The root of the problem is that Lawrence has painted the reader (and himself) into a corner. It isn’t crazy to think that no ending is going to be satisfying, no matter how you feel about Jorg’s character. Lawrence does an admirable job and and takes the only real option available: confusion (the questions above aren’t really answered). There can be no happy ending for Jorg where he gets everything he wants – that would leave a bad taste in the reader’s mouth. On the other hand, you could root for Jorg to die horribly without getting what he wants, and while you might justified in thinking that, it means the entire journey was a waste of time. Jorg takes the only good path available, but all of the people he killed to get there makes it hard to swallow. Not only that, but I agree 100% with Redhead – the Dead King’s identity made absolutely no sense, nor did his motives in targeting Jorg. Which kind of undermines the entire plot.

In conclusion, although I was captivated by parts of Emperor of Thorns, the flashbacks simply weren’t interesting enough and a little gratuitous, and the ending, although fitting, wasn’t particularly memorable. It wasn’t something that resonated with me and had me thinking about it long after I had closed the book. In looking at the series as a whole, I still feel it was well worth the dark and twisted journey it took me on. However, I loved the plot most when it was a battle between court wizards who moved people about like chess pieces. When it became something different, it was a bit disappointing for me and as a result I will always feel like Prince of Thorns was the high point in the series.

2 thoughts on “Book Review: Emperor of Thorns by Mark Lawrence”