The contestants travel to the coast for inspiration, as they are to create a new, undiscovered humanoid species. There is one caveat: the paint job must look good under both regaular light, and must be bioluminescent under ultraviolet light. Oh, by the way: it’s a double elimination week! The contestants were taken to the ocean for inspiration because the depths of the ocean does house many bioluminescent species, but early on its clear that Meagan is having trouble conceptualizing and has chosen to be different by going with a cave dweller. During the first day she leaves with what turns out to be food poisoning. Unfortunately this lost time affects her work and puts her in the bottom, although she never really conceptualized her creature. She is the first to be eliminated. Anthony bounces back from some rough times with the top look, and Wayne’s is also awesome, although he leaves himself short on time for paint and under UV it’s not as impressive. The second to go is Eric Z., whose creature didn’t look that bad. I thought Eric F.’s creature looked worse under regular lights, but looked cool under UV. Either one could have gone in my opinion, but I pretty much agree with the judges here, and thankfully with Meagan gone so to goes the majority of the awful drama that has plagued the show this year. There are now only 5 contestants remaining…

There was actually a Foundation Challenge this week, in which contestants were tasked with taking a fairy tale heroine and making her a bad girl. Eric F scored a big win with his Little Red Riding Hood – not only did he earn immunity, he also got a massive makeup kit. Wayne came up just short with his Little Miss Muffet’s spider look.

The Spotlight Challenge showed that talent is still lacking on the show this year. Most of these contestants are failing in the conceptualization aspect, as a bad design can’t be overcome no matter how much make up you put on. Even Anthony struggled this week and ended up in the bottom. Wayne should have won with his Firefly, but left his key element at the workshop and couldn’t finish the design. In my opinion it was still the top look. That honor instead went to Kris, for his Butterfly.

Alam’s Grasshopper was hideous – she should have stuck to anime. Joining Alam and Anthony in the bottom was Meagan’s Moth, which I didn’t think was that bad. So between Alam and Anthony, Alam had to go…cutting a multiple challenge winner like Anthony this early would have been ratings suicide. Hey, the guy had a bad week, everybody does at some point. Here were the worst looks:

Now this is more like it! We’re starting to see some real talent shine through as the dead weight gets cut, but there’s still more to remove. This week the contestants were tasked with making a multi-headed giant inspired by the upcoming movie Jack the Giant Killer. Appropriately, Bryan Singer was a guest judge (as he directed that film). The creations were excellent, except for Jenna and Meagan’s effort. I really felt sorry for Meagan, who spent the whole time wondering if she’d be sent home, but it was Jenna who was cut. Props to Jenna for admitting she was the cause of their disastrous entry, but it was definitely time for her to go, the drama surrounding her crippled hand was becoming far too much to take every week. Top looks went to Eric F. for his concept on creating a giant that truly dwarfed the competition…he choose to have his hulking model actually be Jack while two sculpted giant heads towered above. It put a smile on the judges’ faces as soon as it came out and was the easy choice for the win. Eric F. shows that when he can get the assistance of a good team member, he’s capable of winning it all, but working by himself leads to him running out of time due to ambition.

Here were my favorites: 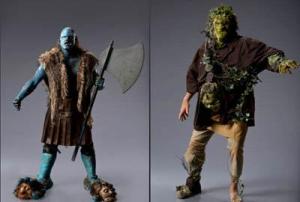 This week’s episode continues the trend of showing how conceptually challenged the contestants are this season. This time there were no twists: simply create a bearded lady for a circus in the Foundation Challenge, and then a candy-inspired creature for the Spotlight Challenge. The Foundation Challenge was just bizarre, with a trip to visit a champion Beard and Moustache wearer. Is it just me, or does referring to growing beards and moustaches as a “sport” seem a little off base? I mean, that’s like referring to growing a flower “a sport” or bird-watching “a sport”. An activity, yes, a contest or competition, sure. But a sport?

I digress. I have no desire to recap the Foundation Challenge, other than to say Eric Z. deserved to win for the most convincing make-up. The Spotlight Challenge of an original candy character proved to be more than most of the contestants can handle. Where they seem to be struggling is in the conception phase…all the make-up in the world won’t hid a poor design, and some of these people have no imagination. Anthony created a top character once more, but the show skipped over the judges’ comments, probably in an attempt to make viewers forget about him for one week. Kris’s candy corn demon was excellent, and certainly deserving of a win. Finally some talent on display! Eric F.’s gluttony demon was disturbing yet awesome, but not good enough to beat Kris’s demon. Anthony should have been in the top looks instead of Alam, but her effort was pretty good, so I can let that slide.

Here are the top looks:

As for the bottom, this is the second week in a row that Jenna should have been sent home. She is physically unable to compete, lacks imagination, and has no eye for color. All the bottom looks were terrible, too bad they couldn’t all be sent home. Alex tried something she’d never done before – silicon molds, and failed, but I’m not sure she should have gone home over Jenna and Autumn, who have stuck around so long that I think the judges are being told to save them for the horrendous drama they create. Booooo!!! Here are the awful bottom looks:

Another week, another disappointing effort by the contestants. Nobody on this season’s show, except maybe Anthony, could even sniff the top looks last year. And whoever is planning these challenges needs to get real. The director throws in these 180 degree reverses thinking it’s clever, but what they are really doing is making people stumble and put forth substandard work because conceptually they have to redesign their creature after they’ve already started. On a set with a few weks to work magic, no big deal, but in two days??? Come on, producers. You’re sabotaging what was looking like great make-up efforts. Of course, the season has already been filmed except for the live results show, so I’ll get off my soapbox now.

This week the contestants were charged with making demons from different cultures. Things were looking awesome until the changed it to “Hell Freezes Over” and everyone had to make their demons icy. Lame. Once again Anthony showed he is the one to beat with his fourth straight win. Hard to see how someone will beat him unless he gets teamed up with someone who drags him down. Here’s his effort this week: 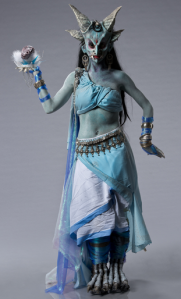 And I agree with the judges that these were the worst:

Glenn Hetrick is both funny and a tool. I laughed out loud when he said, “When you walk up to that thing, it punches you in the face with how bad it sucks.” Then he also has the nerve to say to a contestant (and I’m paraphrasing here as I don’t remember the exact quote), “From far away it looks good, but I couldn’t put a camera on that to do a close up.” Excuse me? Just once I’d like to see a judge get up there and put his (or her) work against the contestants, with the same materials they have to work with and only 2 days to do it. I doubt very much he does ANY close ups after only two days’ worth of work. (There’s that soapbox again – I could have sworn I left it in that corner…)

No Foundation Challenge this week, straight to the Spotlight Challenge. The contestants are whisked away to Comic Con in San Diego, where they are tasked to create an original superhero. Anthony continues to show some amazing talent despite having a major prop malfunction. Aside from Anthony and Eric, all the other entries were awful. I hope they get better, otherwise this will be a tough season to watch. They really could have used some mentoring from Michael Westmore. These were my favorite looks: 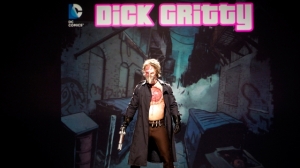 This was the worst of the worst:

Despite some of the lame drama that happens from time to time, Face-Off is one of the few reality shows I can actually watch and enjoy. With big-name guest judges in the past like Bryan Singer, Kevin Smith, Gale Ann Hurd, and Brian Grazer, the show has put out some amazing effects and discovered some great make-up artists. The format of the show is for the group which starts out at 12 people, has a “foundation challenge” where an individual can earn immunity. Then the spotlight challenge gives artists two days to come up with a look that satisfies the challenge, with an additional 4 hours on the third day, followed by last looks, a final hour  of prep. The top 3 looks are chosen, then the bottom 3. One of the bottom 3 goes home each week until only 1 person remains. Besides the fake drama, my only other critique I have is the harshness of the judges – I seriously doubt they have 2.5 days to work their own make-up magic!

This week started the show out great, showing some seriously talented individuals are in the competition this year. The foundation challenge was for each person to create a “queen” from various crowns that were displayed. Some excellent potential was shown here, especially Anthony, who won immunity, and Jenna, who did some beautiful color and make-up. Judging the the foundation challenge was host McKenzie Westmore’s father, renowned make-up artist Michael Westmore, who will also be mentoring the contestants throughout the season.  (Sidenote: it seems every season McKenzie gets more beautiful!) Then came the spotlight challenge: making a goblin king based on a terrain element. John Rhys-Davies was the guest judge, who offered thoughtful commentary, and a hilarious rant about how he would never wear prothstetic make-up again. Way to sell the show! These were my favorite looks of the show, with Anthony sweeping the show by winning with the Rock Goblin King on the left: 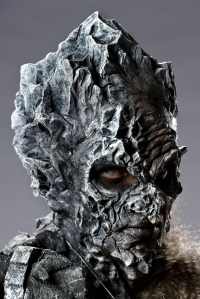 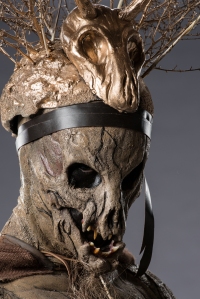 And this design was a hot mess that deserved to be judged the worst: