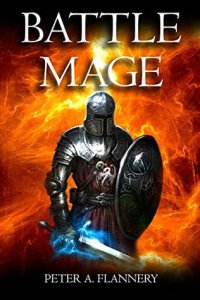 Do you like dragons? Demons? Farm boys with swords that go to a school for training? Battle tactics and armor descriptions? Then this book is for you! In all seriousness, I was a little nervous about multitude of tropes that manifest within the pages of Battle Mage. Even the cover had me thinking that this book was nothing special. But a funny thing happened on the way to the Epilogue…

First, let’s start with some reviews. I didn’t find any dedicated blogs that had reviewed Battle Mage, except for one called H. G. Chambers, so in addition to that, I pulled some reviews off of Goodreads. H.G. Chambers of hgchambers.com writes: “I must admit, when I first picked up Battle Mage, I was not expecting anything extraordinary. A fairly generic title, and a nice looking, but also somewhat generic cover. As I delved in however, I found the story to be anything but. It begins with Falco Dante and his best friend Malaki. Since a young age, Flaco has been afflicted with a lung disease, putting him at a great disadvantage. He’s got lots of room to grow, and Flannery makes use of every inch. Malaki, the son of a blacksmith, is quite the talent with a sword. While his character goes through less of a metamorphosis, he’s still enjoyable to get to know. Both characters are entirely likable, and I found myself rooting for them from the beginning.

In this coming of age fantasy adventure, the world is afflicted by the presence of the “possessed,” a demonic force from hell that is determined to overtake humanity, ensnaring it in eternal, permanent suffering. The bigger demons emanate an aura of fear that cripples regular soldiers, unless under the protective shielding of a battle mage. When a battle mage completes his (or her) training, they may attempt to summon a dragon. If it answers their call, then they are bonded with it, and together they stand in battle against the demons and their armies of possessed. I really enjoyed the concepts and premise of this book. It achieves a balance between original ideas, and familiar fantasy concepts that you don’t always see in this genre.”

Shari Kay on Goodreads says: “This book appealed to me because it sounded like an old school fantasy read (which I love). You know the kind– the ones where an ordinary young man overcomes all the odds, finds out how special he really is and fulfills his destiny by saving the world at the end. That trope. About the time I got to the hated RED WEDDING scene in the GoT series, I was over the dark plots that are so prevalent in the fantasy genre today and looked forward to a book with a likable character with a happy ending. BM lived up to that expectation…mostly.

BM has magic, dragons, Demons, betrayals, secrets, deaths, victories, cruelty, violence and heartache. It is epic in it’s scope and detail. You really know these characters by the end and fear for their lives–for their very souls.“

Kathleen on Goodreads states: “Good story, but too lengthy for me. With so many pages, we never learn whether all the lost souls are freed from eternal suffering when their demons are killed. After all the sad descriptions of eternal suffering and baelfire, this felt like a major mistake. In all those 850+ pages, oh so many deaths and repetitive battles. I began to skim the battles.

The testing and summoning scenes were excellent, though.

Demons and possessions and eternal suffering but no religions, no gods mentioned in this world. Seems unlikely.”

These are all excellent points, and yet there is a great story here, an epic fantasy full of tropes and flawed but likable characters, though the story is not without problems of it’s own. So why should anyone read it? What is different about Battle Mage than all the other trope-ridden stories out there?

My answer: Battle Mage is a story about fear and self-doubt warring with faith and love, and overcoming loss, but even more than that, it is about failure and redemption. In fact, the book is divided into three sections, the first and third of which are titled “Ruin” and “Redemption” respectively. I’m going to reveal a minor spoiler here because it explains what I mean about failure and redemption. There’s a scene near the beginning of the book where the main character, Falco makes a horrible, tragic mistake. This mistake causes the death of other characters, the panicked evacuation of a village, and still more deaths, including someone dear to Falco. This in turn leads Falco to despair and self-loathing, and although time lessens the pain a bit, it takes a long time for him to overcome the effects of that one mistake. That’s essentially the underlying theme of the story – how a youthful mistake that costs lives is ultimately redeemed by the willingness to sacrifice oneself to save others, and thus give one’s life meaning and value.

And that’s what makes the story incredibly deep – the characters have flaws that don’t make you want to throw the book across the room. They aren’t frustrating flaws like stupidity or conceited entitlement…instead, these flaws are naivete, youthful inexperience, and uncontrolled passion. And although the “kids go to school” trope is here, it is not the whole story, rather just one section, and is necessary to explain how the youths develop their talents and are given commissions. Going back to Shari Kay on Goodreads, she says: “The idea that inexperienced “kids” were given, and kept, command of military units seemed farfetched during war time“. But what you have to remember here is that this is a war that’s been going on for quite some time and many of the able leaders have been slain, so anyone who shows an inkling of command ability is going to be handed the reins. And as is true in our own world, young inexperienced officers are given command over a unit, often with disastrous results, so it didn’t seem quite as far-fetched to me. The fact that these young leaders all came from the same village is more far-fetched, and tips a cap to Robert Jordan’s Wheel of Time, where many of his young protagonists come from the same village. In Jordan’s story, however, that is explained away as destiny or fate (“ta’veren”); In Battle Mage it just is, with no explanation as to how it is possible.

In addition to finding the characters and the story compelling, I also enjoyed some of the unique ideas that Peter Flannery utilizes to tackle old tropes. The forging of a battle mage’s sword, the testing of abilities by the Magi, the bonding of a battle mage to a dragon, the various demons that control the undead armies – Flannery does a good job of breathing new life into these well-worn fantasy staples. Additionally, there was a lot of tension as the story progressed, as I wasn’t sure who was going to live and who was going to die right up to the end. I also should add that Flannery’s prose is excellent, and rarely gets in the way of the story, except for some of the “boss” showdowns with demons that don’t feel fluid – maybe choppy is the right word to use here – and battles end up being a bit repetitious.

There are a few other problems I should point out, and you might want to avoid the rest of this paragraph if you have an aversion to serious spoilers. One problem is that the story ends quickly after the final battle and wraps up a few things, but there are many unanswered questions. Maybe those things get explained if a sequel is coming, or maybe they will go forever unanswered. As Shari Kay points out: “But the main reason I couldn’t give this book a higher rating was because of the ending. I hated it…am I just suppose to assume things worked out? That all our people lived? That the war was won? Can the Emissary marry the Queen now? What consequences did the Prince have? What about Meredith’s father? What was up with the 3 mages at the end? What was the connection with Falco? Why did they get another dragon? I thought there was only one per mage. Do all the black dragons come around, do some dragons still go mad?” I would add, what happened to the commander in the south that was turned? How did Meredith deal with his own father and what became of the Magi? What happened to Fossetta? How was the young “autistic” boy in the village able to determine who would become a Battle Mage? Why do Battle Mages all have the exact same abilities?

Another problem is what Kathleen pointed out above – there is absolutely no religion. There are no gods (not even primitive sun or earth gods), no creation story, and people say prayers, but if there are no deities, who they are praying to? In fact, demons pray to something or someone in the underworld, but it’s not clear who it is they pray to, either. Also, why are there European names everywhere (French, German, Italian etc.) but yet this story does not take place in Europe? Is it a different plane of existence? Europe in the distant future?

In addition, there’s a bit of a “superhuman” problem, where people should be beyond their limits, are exhausted or severely injured, and yet draw on hidden reserves to persevere, which seems a bit deus ex machina. Finally, demons are brought from hell to the surface at various times. It’s not clear how many demons there are, and why they aren’t all brought to the surface at once considering the war has been going on for some time. What’s the limiting factor? How does “hell” work? It’s all a bit nebulous and convenient for plot purposes.

Criticisms aside, I was thoroughly entertained by Battle Mage. The length of the book is a challenge, but I felt it was a much better solution to have this single massive tome that advances through the plot at a decent speed, than it is to split it into a trilogy and pad it with tons of fluff. I thought the pacing was good, the characters were believable, and the underlying theme of redemption was well done. I’ll be watching to see if Peter Flannery has a sequel up his sleeve, and if he does, I will most certainly spring for it.